I wanted to find a way to prolong this experience, to slow it down, and to be able to deeply study every single aspect of it, says Hash C. Borgir - Author of 1200 DMT Trips: Navigating the Other Side 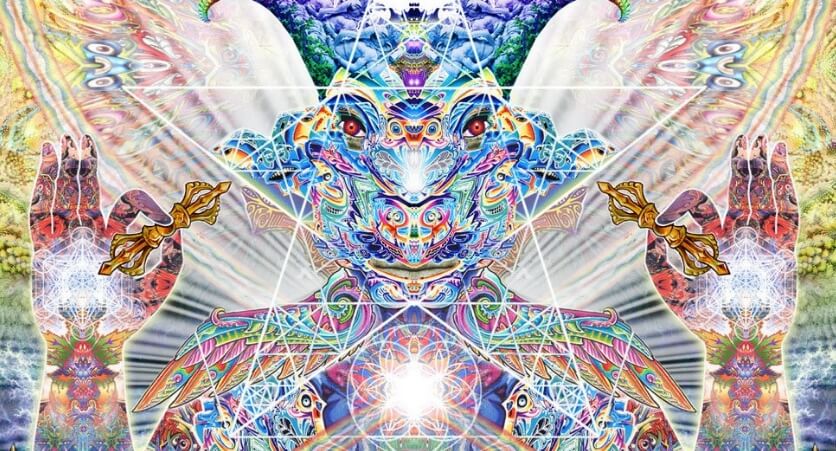 DMT (Dimethyltryptamine) always seems to leave me with a desire for more. DMT happens to come on the quickest, and has the shortest acting duration out of all the psychedelics.

The peak of the DMT flash lasts for maybe 90 seconds total. I wanted to find a way to prolong this experience, to slow it down, and to be able to deeply study every single aspect of it.

To that end, I have combined DMT with almost everything else I could get my hands on, and I have landed upon some neat tricks I’d love to share with you.

Some plants are considered holy and otherworldly. B. Caapi and P. Harmala are two such plants.

(Vine of the Souls)

Banisteriopsis caapi is considered sacred by the many tribes in the Amazon, where it naturally grows. It is otherwise known as Ayahuasca.

Ayahuasca contains harmine, harmaline, and tetrahydroharmine, which are MonoAmine Oxidase Inhibitors. When combined with the Psychotria Viridis plant, it allows for the DMT to be orally active.

The name Ayahuasca means “vine of the soul” in Quechuan. It it said that B. Caapi is imbued with the spirit of mother Earth herself, who guides you on your journey.

(Seeds of the Divine)

There is another plant from my homeland called Peganum Harmala, whose seeds are used throughout the Indian and Middle Eastern regions for its spiritual properties.

In Hinduism is is used as a Dhooni, which is inhaled through smoking. In Islam, it is used to ward off the evil eye, and to clean the house of evil spirits. It was one of the favorite plants of Prophet Muhammad.

Harmala is said to be imbued with the spirit of the Harmala Goddess. She is a divine being who guides us through the infinite wisdom of nature.

Communion with the Divine

The vine of B. Caapi and the seeds of P. Harmala both contain Harmine, Harmaline, and Tetrahydroharmine. P. Harmala seeds contain a higher concentration of these beta-carbolines.

Harmala alkaloids are used as Monoamine Oxidase Inhibitors (MAOIs). This prevents the immediate metabolism of DMT and other monoamines. Harmaline can also be used as a hallucinogen on its own.

The roots of the South American traditions and the roots of Hindu traditions share something interesting. One of the ingredient herbs of Ayahuasca is Justicia Pectoralis which is known as ‘vasaka’ (वासक) or ‘vashaka’ (वाशक). ‘Ayu’ (आयु) means ‘life’, ‘soul’, and ‘divine personification residing in life’.

Another form is ‘ayur’ in ‘Ayurved’ - where ‘ayur’ stands for ‘life’. The ‘aya’ of ‘Ayahuasca’ seems to be related to the Sanskrit ‘Ayu’ and ‘ayur’- both in sound and in meaning.

My grandmother was a “Dehar” Shaman from India. She gave me Ayahuasca at the age of three. The form I was given is called “Harmal Ki Dhooni.”

This is a process where the Shaman places hot coals upon a tray or a hole in the ground, throws dried and crushed hamala seeds on top, drapes a towel over your head, and you inhale as much as you can.

When smoked in sufficient quantities, Harmala can produce a psychedelic state of mind. One may even experience some visions if a large enough dose is taken.

When harmala is taken before administering DMT, this drastically slows down the onset and prolongs the duration. Not only does it come on much more slowly; it lasts an order of magnitude as long.

I discovered a neat trick while in this psychedelic space. I am able to pay attention, look at the landmarks, talk to the beings, interact with them, play with their objects and gifts, jump into these objects, and emerge from the object of another. I can create my own worlds while inside the DMT space.

There so much more to do in the DMT Hypersphere when one can stay in for hours.

My regimen consists of roughly 500mg of Harmala alkaloids, with Cannabis or by itself in a dab rig. Complete saturation of the brain with the MAOi compound is the key to prolonging the DMT state. After smoking 500mg of Harmala alkaloids, I wait for about 30 minutes and then I vaporize the DMT in massive quantities. My go-to dosage is roughly 80-100mg of pure white crystals.

Not only does this prolong the DMT flash– it also intensifies it by at least ten-fold. I touched upon this in my personal blog: The Most Potent Psychoactive Concoction On The Planet, Created By Hash Borgir

Various Lysergamides, when combined with Harmala alkaloids, quadruple the amount of time one may stay within the Hypersphere. Lysergamides are amides of lysergic acid.

Lysergamides are polycyclic amides which have both phenethylamine and tryptamine groups embedded within their structure, and a carboxamide group attached to carbon number eight.

Varying the substituent attached to the nitrogen atoms has produced a variety of drugs with psychedelic effects, as well as various useful prescription medications including those for treatment of headaches and inducing labor. Hydroxylation of the aromatic ring is one method of metabolizing lysergamides in humans, and produces compounds with greater affinity for dopamine receptors.

The psychedelic effects of lysergamides are believed to come from their partial agonism at the 5-HT2A receptor. Lysergamides are known to have affinity for a much greater variety of receptors than most other psychedelics do.

In LSD the aromatic benzene ring A and the N-6 nitrogen are essential for hallucinogenic activity; these sites may react with the receptor. The conformations of amphetamines and indolealkylamines at the receptor are such that the aromatic benzene ring lies like ring A of LSD and the alkylamino nitrogen lies like the N-6 of LSD. Ring A may interact with the receptor by forming a ir-molecular complex, as suggested by the correlation between hallucinogenic activity and energy of the highest occupied molecular orbital (EH) of congeneric series. The N-6 nitrogen of LSD and the sterically congruent nitrogen of the other hallucinogenic compounds may react with the receptor by forming a donor acceptor complex of the n-7r* or n-&* type. Other portions of the hallucinogenic molecules confer a favorable EH: these include the methoxy and hydroxyl groups of the amphetamines (and mescaline), and the indolealkylamines; and the pyrrole ring of LSD and the indolealkylamines.

The length of time DMT remains active, or for how long one remains within the Hypersphere, is greatly affected by the presence of other compounds. Please bear in mind that one can only share their personal experiences. I do not recommend for anyone to try these synergies, as people have actually died from some psychedelic compounds and combinations (for example, a hallucinogen called 25i has been lethal in some cases).

Please, proceed at your own risk. I am not advising you to do anything that I have done.

When I want to stay inside the DMT Hypersphere for a few hours (and not with Ayahuasca, which is different– but smoked DMT, I would:

The lysergamide will be slowly potentiated by the Harmaline/Harmine/Tetrahydroharmine combination for the entire course of the journey. When the LSD begins to peak, I smoke or vaporize the Harmala and hold it in. This will send the LSD into a frenzy of visuals. Then I wait about 30 minutes, in order for the smoked harmaline to reach a saturation point.

Once the brain has been sufficiently saturated with Harmine, I dab in one giant hit of 80 - 100 mg of near-pure white crystalline DMT. I pinch my nose shut and I hold my breath. At the emergence of the visions, I begin to slowly exhale, never letting all the DMT out.

I have been able to make the DMT flash last for over an hour, but I am fairly certain that it can be even further prolonged.

1200 DMT Trips - Navigating The Other Side

Please check out my upcoming book on DMT: Navigating the Other Side