What psilocybin mushrooms taught me about myself, nature, the path of least resistance, and the way of the ancestor monkey. 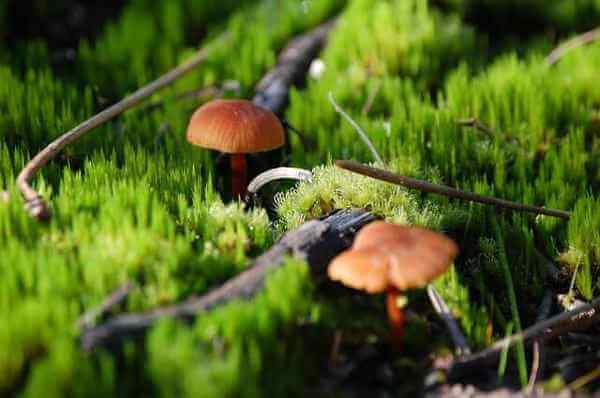 One of the many lessons I have learned from the Sacred Mushroom is that of patience, grace, elegance, refinement of movement, and favored motion. The Way of the Ancestor is the path of least resistance.

Monkeys And The “Skinner Box”

The Way of the Ancestor forced itself upon me one summer when I decided to eat psilocybin mushrooms for breakfast, lunch, and dinner, while drinking mushroom tea in between to hydrate myself. When the body is psychologically & physically hammered on high doses of psilocybin (14-28 dry grams), engaging in any activity seems to be a monumental task.

That day, I discovered that the water in my bottle had been depleted, and none was nearby. I was parched. In my extremely intoxicated psychedelic state I would have to fetch some water for myself. Somehow I found the energy to get up. My first obstacle presented itself immediately: I had to go down a flight of stairs. Usually, I take large strides and skip steps so that I can go up and down the stairs faster. But on this day, only halfway through the staircase, my mind screamed in agony, and I sat down in revelation of something that shook me to my core.

Why is life in a constant state of emergency? Why am I always rushing to fly up and down the stairs? Why am I always skipping steps so that I can get where I am going faster? What will the time I saved be spent on? Is that time worth saving by torturing my body?

What psilocybin mushrooms taught me about myself, the path of least resistance, and the way of the ancestor monkey.

One must have noticed this about oneself. The constant rush. The hurry to engage and finish, to get somewhere. Why are we told to save time and that there is never enough time? Why is the mind constantly seeking something in every moment? What do we have to do in life that we just don’t have the time?

The majority of our lives are in a constant state of emergency. It is no wonder we have to “make” time to meditate and find peace. It would seem that we mostly not at peace. What are we doing in our everyday lives, the little things we think, the actions we take, and our behaviors and interactions with others? It seems that we are chasing something.

I started to recognize my psychological conditioning similar to that of a rat in a Skinner Box; “[…] an apparatus for studying instrumental conditioning in animals in which the animal is isolated and provided with a lever or switch that it learns to use to obtain a reward, such as a food pellet, or to avoid a punishment, such as an electric shock.”

Here is a paper by Comparative Cognition Laboratory on the operant conditioning chamber which sheds light on the entire conditioning process.

Why are we conditioned to be frantic, to always be in a rush, always be in a hurry? We have been conditioned to believe that we must always be productive and work faster. Ever since we are children we are taught to not “waste our time sitting around”. This conditioning goes deep, haven’t you noticed? We’re on a hamster wheel, and we are psychologically punished if we are not as productive as the rest of the members of our culture. We are called lazy and inept, unable to keep or commit ourselves to mundane mind-numbing jobs, and that we are a burden on society. We are even physically incarcerated if we refuse this conditioning and say that we must discover our own value systems in order to function harmoniously with nature and not fight against her. For all intents and purposes, society is nothing more than a collective Skinner Box.

Way of the Ancestor Monkey

Intoxicated on heavy doses of psilocybin mushrooms, the epiphany came crashing down upon me with such force that it obliterated the ‘self’. I realized that the greatest wisdom is housed within the body, the infinite gnosis of the Universe seeking to express itself through me. The ‘self’ is what has been given to me by culture and society since birth, but the body houses all the knowledge it needs to function in this Universe. It doesn’t need a guide, Oriental or Occidental.

The wisdom of the ancestors slices through the motions and actions an organism needs to make in order to accomplish a task. It perfects the action which is then used for survival and reproduction. It is graceful, minimal and most effective.

The ancestral ways are the ways nature has perfected over time, and this entire knowledge is housed within the body. The natural instinct of the body is tremendous. There is a vast knowledge there, in the mysterious enigma called the body.

Morphic resonance is a process whereby self-organising systems inherit a memory from previous similar systems. In its most general formulation, morphic resonance means that the so-called laws of nature are more like habits. The hypothesis of morphic resonance also leads to a radically new interpretation of memory storage in the brain and of biological inheritance. Memory need not be stored in material traces inside brains, which are more like TV receivers than video recorders, tuning into influences from the past. And biological inheritance need not all be coded in the genes, or in epigenetic modifications of the genes; much of it depends on morphic resonance from previous members of the species. Thus each individual inherits a collective memory from past members of the species, and also contributes to the collective memory, affecting other members of the species in the future.

The body is a store of the collected memories, experiences and knowledge of the perfected ways and methods of the Ancestor Monkey. Listen to the body. Pay attention to what it’s trying to tell you. The body only wishes to teach. The body learns on its own and does not need thought.

The path of least resistance is when the organism flows with the flow of nature. Nature bestowed upon man her own godhood, and there, man resembles her in spirit and in form. Worship not false idols, but the Earth herself. Worship the divinity of nature expressing herself through the Gaian mind. You are the intelligence of the Universe. Don’t culture, society, religion or ideology curtail your natural expression.

When the body is loaded on extremely high doses of psilocybin, engaging in any activity is difficult. This is where the mushroom will force upon you grace, patience, fluidity of motion, and the Way of the Ancestor Monkey. Any action you take will be peaceful and tranquil. Every move you make will be fluid, working along the path of least resistance.

Psilocybin taught me about grace. It showed me true peace and tranquility of the body. It showed me that thought tortures the body, but in the Natural state of the organism, thought is always in the background, but only ever surfaces to the forefront when the organism needs to perform an action. Without thought the body functions peacefully and harmoniously as Nature designed it to function.

This body is my only true God. The being that is the human is the imagery of the cosmos bounded up as the flesh of the monkey. The body does not wish to learn anything from thought, from any system Eastern or Western. This body does not wish to learn. It only wishes to teach. The voice of God, the wisdom of Gaia, the knowledge of the ancestors speaks volumes through it.

Mushrooms have taught me patience, grace, and the path of least resistance. I no longer rush to get things done. I no longer fly up and down the stairs, skipping steps which was psychologically indicative of taking shortcuts and wanting to save time by torturing the body. Save time for more of the same mischief-making, and for the self-generation of misery.