An LSD analogue which appears to be slightly more potent with a shorter duration. Its effects are reported to be extremely similar to LSD, and thus far seems to be similarly safe. Released in late 2014, It has quickly become a highly popular research chemical due to its implicit legality, similarity to LSD and wide availability on the Internet. 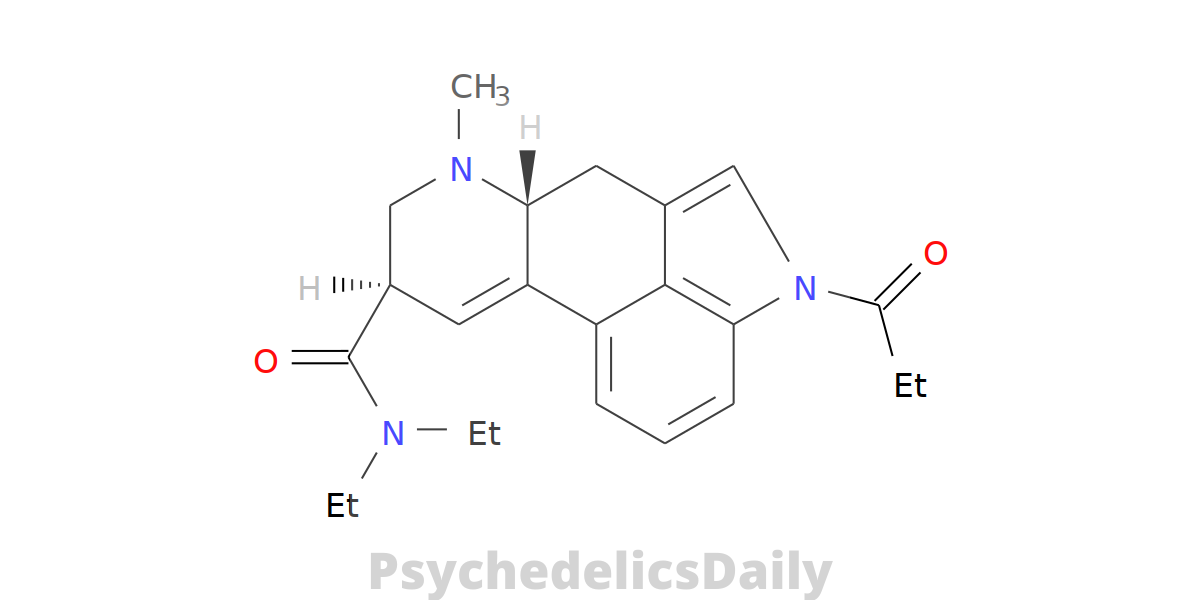 An LSD analogue which appears to be slightly more potent with a shorter duration. Its effects are reported to be extremely similar to LSD, and thus far seems to be similarly safe. Released in late 2014, It has quickly become a highly popular research chemical due to its implicit legality, similarity to LSD and wide availability on the Internet.

1P-LSD is closely related to LSD and is reported to produce near-identical effects. Little is known about the pharmacology of 1P-LSD, but it likely produces its psychedelic effects by acting on serotonin receptors in the brain. The original synthesis date of 1P-LSD is unknown.

Unlike most research chemicals, 1P-LSD has no prior record in the scientific literature. The first reports of 1P-LSD use surfaced in 2015 following its appearance on the online research chemical market. It was marketed as a legal alternative to LSD alongside other novel lysergamides like ALD-52, ETH-LAD, and AL-LAD.

Subjective effects include geometric visual hallucinations, time distortion, enhanced introspection, conceptual thinking, euphoria, and ego loss. User reports indicate that the subjective effects of 1P-LSD are extremely similar to those of LSD. 1P-LSD is theorized to act as a prodrug for LSD.

This hypothesis is supported by the results of a study, showing 1P-LSD is metabolized to LSD in rats. This predicts a near-identical effect profile, likely differing mainly in its rate of absorption and duration. Characteristic effects include geometric visual hallucinations, time distortion, enhanced introspection, and ego loss.

Its classical psychedelic effects and favorable tolerability has led it to become popular among novel psychoactive substance users who use it interchangeably with LSD. Very little data exists about the pharmacological properties, metabolism, and toxicity of 1P-LSD. It is presumed to have a similar toxicity and risk profile as LSD, although no evidence currently exists to support this.

It is highly advised to use harm reduction practices if using this substance.

A lucid argument can then be made that lysergic acid N,N-dimethylamide is derived from lysergic acid amide rather than LSD. Carrying this theme to the next logical step one would then assume that the 1-alkyl and 1-acyl derivatives of the N,N-dimethyl isomer would also not be controlled by the CsA amendment.— Donald A. Cooper, Future Synthetic Drugs of Abuse, 1988.

It is similar to LSD and is named for the propionyl group bound to the nitrogen of the polycyclic indole group of LSD.

Propionyl consists of the carbonyl chain CH3CH2CO- bound to an amino group. 1P-LSD is homologous to ALD-52, which holds an acetyl group bound to the nitrogen instead of the propionyl group bound at the same location.

The structure of 1P-LSD contains a polycyclic group featuring a bicyclic hexahydro indole bound to a bicyclic quinoline group.

At carbon 8 of the quinoline, an N,N-diethyl carboxamide is bound.

1P-LSD is not scheduled under the UN Convention on Psychotropic Substances. It is considered to exist in a legal grey area in many countries, meaning that while it is not specifically illegal, individuals may still be charged for its possession under certain circumstances such as under analogue laws and with the intent to sell or consume.