AL-LAD is a hallucinogenic drug, lysergamide and an analogue of LSD. It is reported as having some subtle experiential differences to LSD (such as increased visuals), and also appears to be slightly shorter lasting. AL-LAD doses are similar to those of LSD, depending on purity. Its availability on the Internet since 2013 has lead to strong popularity among the drug community. 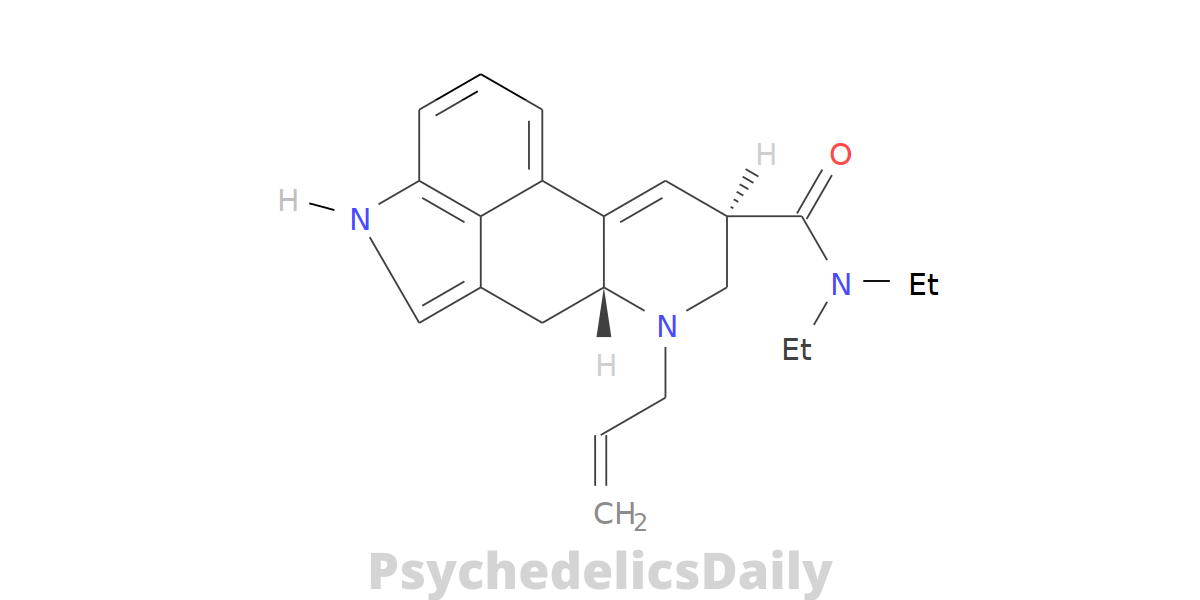 AL-LAD is a hallucinogenic drug, lysergamide and an analogue of LSD. It is reported as having some subtle experiential differences to LSD (such as increased visuals), and also appears to be slightly shorter lasting. AL-LAD doses are similar to those of LSD, depending on purity. Its availability on the Internet since 2013 has lead to strong popularity among the drug community.

AL-LAD is chemically similar to LSD and has a similar mechanism of action, working primarily by binding to serotonin receptors in the brain. AL-LAD was first investigated in 1984 by Andrew J. Hoffman and David Nichols as part of a series of LSD analogs, which also included ETH-LAD and PRO-LAD.

Its activity in humans was later documented by Alexander Shulgin in his book TiHKAL (“Tryptamines I Have Known and Loved”), in which it is described as “considerably less dramatic”. In 2013, AL-LAD appeared for sale on the research chemical market, where it has been commonly marketed alongside lysergamides such as 1P-LSD, ALD-52 and ETH-LAD as a legal, grey-market alternative to LSD. User reports describe the effects of AL-LAD as similar to those of LSD with some subtle differences.

It is thought to either be equally or moderately less potent than LSD itself, with an active dose reported at between 75 and 150 micrograms. It is often described as being more visually-oriented but with a less introspective headspace. It also has a moderately shorter duration and is generally considered to be a less anxiety-provoking and challenging version of LSD.

Very little data exists about the pharmacological properties, metabolism, and toxicity of AL-LAD. While it is often characterized by users as being generally more recreational and non-threatening compared to LSD, it is highly advised to approach this highly potent hallucinogenic substance with the proper amount of precaution and harm reduction practices if using it.

AL-LAD is a structural analog of lysergic acid, with an N,N-diethylamide functional group bound to RN of the chemical structure.

Unlike LSD, AL-LAD does not contain a methyl group substituted at R6 of its nor-lysergic acid skeleton, this is represented by the nor- prefix.

Instead, AL-LAD is substituted at R6 with an allyl group comprised of a methylene bridge bound to a vinyl substituent.

At carbon 8 of the quinoline a N,N-diethyl carboxamide is bound. AL-LAD is a chiral compound with two stereocenters at R5 and R8.

The three other stereoisomers of AL-LAD do not have psychoactive properties.

AL-LAD is currently a gray area compound within many parts of the world. This means that it is not known to be specifically illegal within most countries, but people may still be charged for its possession under certain circumstances such as under analog laws and with the intent to sell or consume.