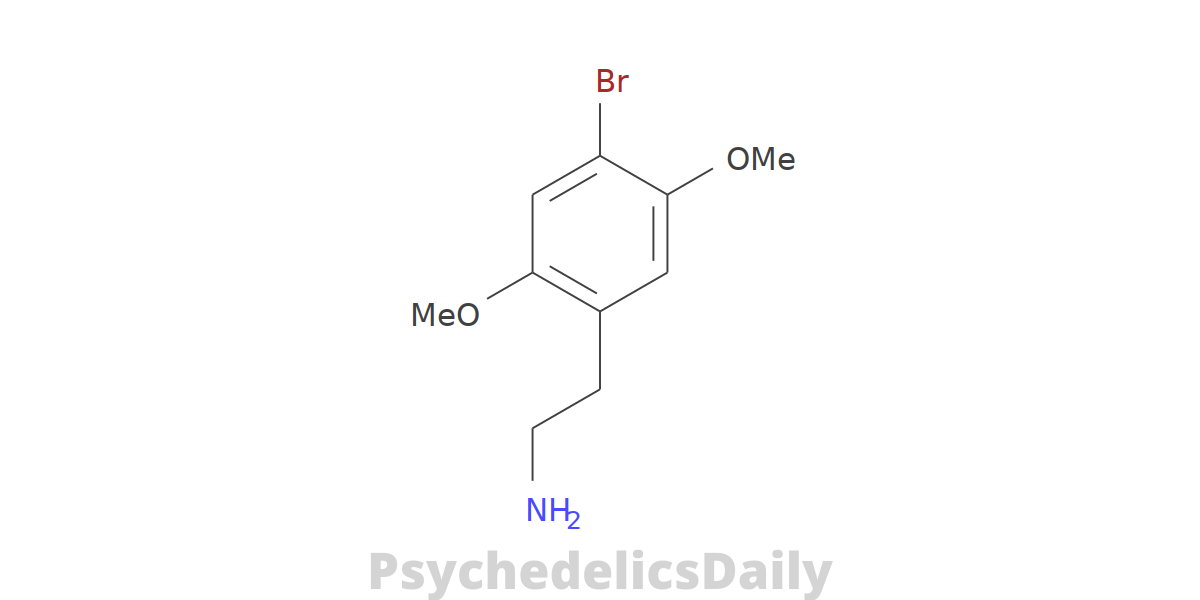 2C-B is the most popular member of the 2C-x family of psychedelic phenethylamines, which are closely related to the classical psychedelic mescaline. It is thought to produce its effects by binding to serotonin receptors in the brain, although the precise mechanism is not fully understood. 2C-B was first discovered in 1974 by the American chemist Alexander Shulgin, who would go onto document its synthesis and subjective effects in his 1991 book PiHKAL ("Phenethylamines I Have Known and Loved").

In the 1970s, it was used in patients by a small number of psychotherapists in the United States and was considered one of the best substances for this purpose due to its short duration, relative absence of side effects, and comparably mild nature. It entered into recreational use shortly afterwards and was manufactured and sold commercially under names such as “Eros” and “Nexus” in head/smart shops and adult video stores before becoming federally prohibited by the DEA in 1995. Subjective effects include open and closed-eye visuals, time distortion, euphoria, and ego loss.

User reports typically describe the effects of 2C-B as moderate, warm, and highly sensual. It is usually described as having a less serious or grandiose headspace than LSD or psilocybin mushrooms, with a greater emphasis on visual and tactile effects. Smaller doses can be used as a sensory and aesthetic enhancer (in a manner somewhat similar to MDMA) while larger doses produce a distinct classical psychedelic effect.

2C-B is thought to be well-tolerated physiologically, with a safety profile that appears to be similar to classical psychedelics. However, more research is needed to fully understand its toxicity and health risks. It is highly advised to use harm reduction practices if using this substance.

His findings were later published in his 1991 book PiHKAL, in which it was listed among the "magical half-dozen" of psychedelic phenethylamines that he deemed most important. The list consists of mescaline, DOM, 2C-B, 2C-E, 2C-T-2, and 2C-T-7. In interviews, Alexander Shulgin repeatedly declared it his favorite psychedelic trip. In the 1970s, 2C-B was used in patients by a small number of psychotherapists in the United States.

These therapists reported that it created a warm, empathetic bond between them and their patients, helping to break down their ego defenses and inner resistances and allowing the patient to get in touch with suppressed emotions and repressed memories. The gentle nature of 2C-B, in addition to its mild side effects and short duration, were found to be desirable traits for a therapeutic setting. Shortly after gaining traction in the underground psychotherapy community, 2C-B became popular in the recreational drug scene. 2C-B was well-liked as a MDMA substitute in raves and parties due to its minimal comedown and a clear, euphoric headspace.

In the 1980s and early 1990s, several foreign companies legitimately manufactured 2C-B under the brand names “Nexus”, “Erox”, and “Performax” and advertised that it would alleviate impotence, frigidity, and diminished libido. It was sold at adult book and video stores, “head” shops, and some nightclubs. The DEA reported its distribution in Miami, Florida as yellow pills marketed as an aphrodisiac. In the United States, 2C-B gained popularity as an alternative to MDMA following its classification as a Schedule I substance in 1985.

Its increasing popularity led it to be placed in Schedule I in 1995. It saw a resurgence in interest in the 2000s, with the advent of the research chemicals scene and darknet markets. 2C-B was legally sold in Southern Africa from 1993 to early 1996. It was marketed as medicine for Sangomas (traditional healers) under the name “Ubulawu Nomathotholo”, which roughly translates to “Medicine of the Singing Ancestors”.

Substituted phenethylamines are a chemical class of organic compounds that are based upon the phenethylamine structure, a phenyl ring bound to an amino (NH2) group through an ethyl chain.

2C-B possesses methoxy functional groups CH3O- attached to carbons R2 and R5 as well as a bromine atom attached to carbon R4 of the phenyl ring. 2C-B belongs to the 2C family of phenethylamines, all of which possess methoxy groups on the 2 and 5 positions of the benzene ring.

Internationally, 2C-B was added to the UN Convention on Psychotropic Substances as a Schedule II substance on March 20, 2001.