A very rare lysergamide that is slightly less potent than LSD, yet with a shorter duration of action. 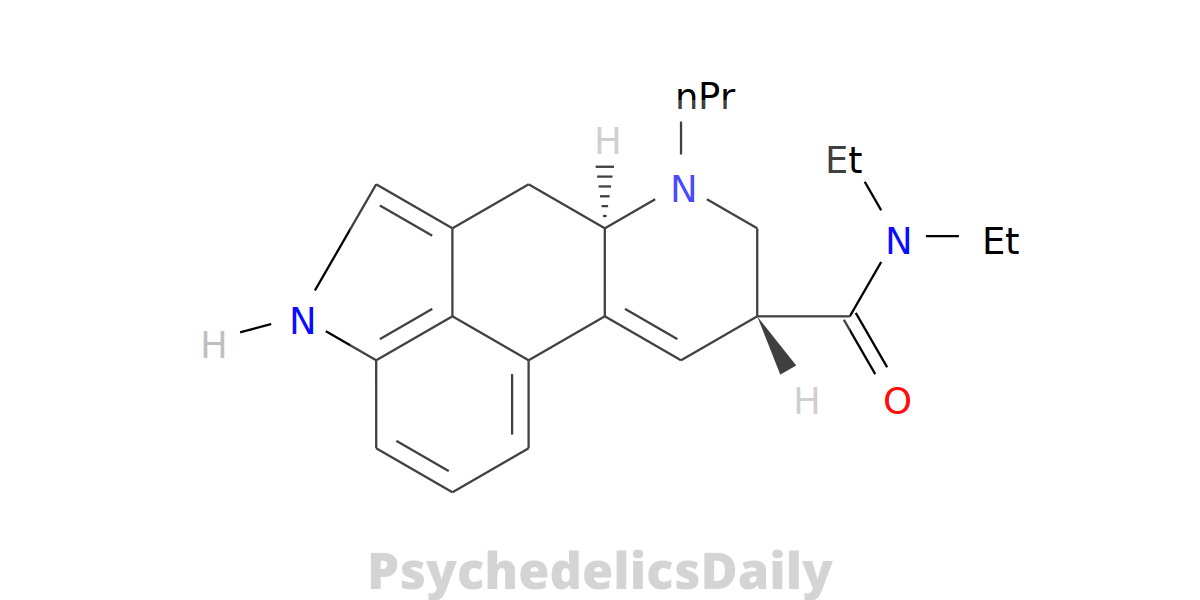 A very rare lysergamide that is slightly less potent than LSD, yet with a shorter duration of action.

It is a structural analog of LSD and is part of a series of LSD analogs which includes AL-LAD and ETH-LAD. PRO-LAD was first investigated by Andrew J. Hoffman and David E.

Nichols in 1984 as part of a series of LSD analogs. It was later described as an analog of LSD by Alexander Shulgin in the book TiHKAL (“Tryptamines I Have Known and Loved”), in which one report remarks that it is “good for humor, even excellent. .

. very good for clear thinking, although not cosmic-type particularly. " It has been sold on the online research chemical market alongside lysergamides like 1P-LSD and AL-LAD as a legal, grey-market alternative to LSD.

Subjective effects are similar to LSD and include open and closed-eye visuals, time distortion, enhanced introspection, ego loss, and euphoria. It has been reported to be around as potent as LSD itself with an active dose reported at between 100 and 200 micrograms. Very little data exists about the pharmacological properties, metabolism, and toxicity of PRO-LAD, and it has little history of human usage.

It is highly advised use harm reduction practices if using this substance.

PRO-LAD is a structural analog of lysergic acid, with an N,N-diethylamide functional group bound to RN of the chemical structure.

This core polycyclic structure is an ergoline derivative, and has overlapping tryptamine and phenethylamine groups embedded within it (although it is principally classed as a tryptamine). PRO-LAD’s structure contains a bicyclic hexahydroindole fused to a bicyclic quinoline group (nor-lysergic acid).

Unlike LSD, PRO-LAD does not contain a methyl group substituted at R6 of its nor-lysergic acid skeleton, this is represented by the nor- prefix.

Instead, PRO-LAD is substituted at R6 with a propyl group.

At carbon 8 of the quinoline a N,N-diethyl carboxamide is bound. PRO-LAD is a derivative of LSD, differing by the addition of two carbons to the methyl group at R6 of the structure to form a propyl chain.

PRO-LAD is also homologous to ETH-LAD, which contains an ethyl substitution at R6 instead of a propyl chain. PRO-LAD is a chiral compound with two stereocenters at R5 and R8.