A psychedelic drug and slightly more potent analogue of LSD, first synthesised by Alexander Shulgin - sometimes described as being less 'abrasive' than LSD. Less common than the associated AL-LAD, though has seen some popularity since its release on the Internet research chemical scene in 2015. 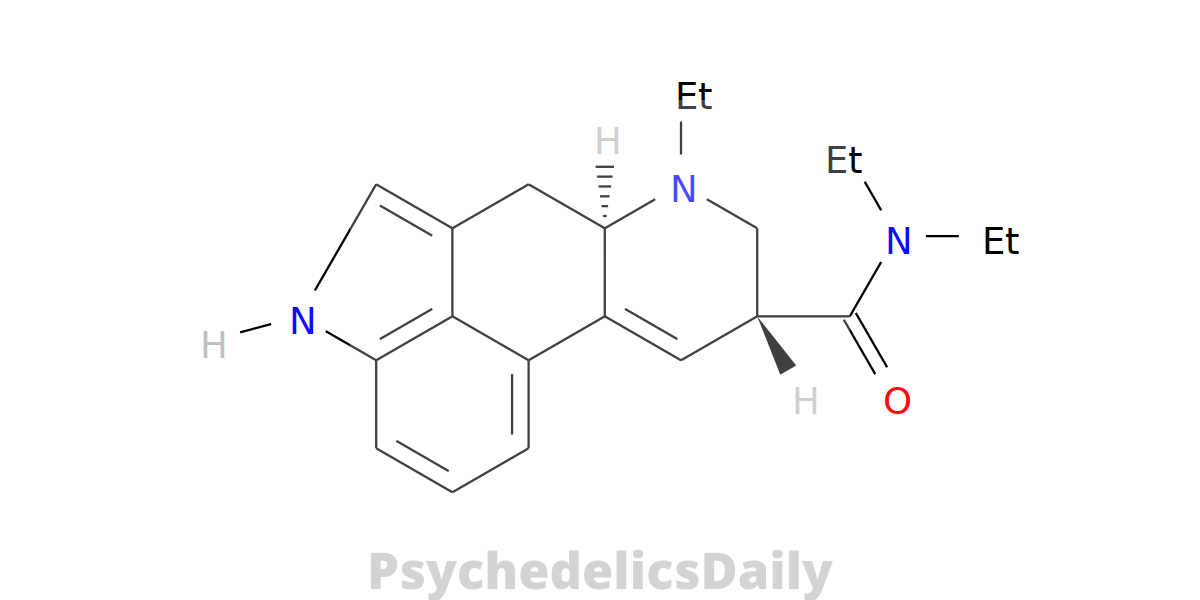 A psychedelic drug and slightly more potent analogue of LSD, first synthesised by Alexander Shulgin - sometimes described as being less ‘abrasive’ than LSD. Less common than the associated AL-LAD, though has seen some popularity since its release on the Internet research chemical scene in 2015.

ETH-LAD is chemically similar to LSD and has a similar mechanism of action, acting primarily by stimulating serotonin receptors in the brain. The human use of ETH-LAD was first documented by Alexander Shulgin in his 1997 book TiHKAL ("Tryptamines I Have Known and Loved"). It is noted for its "modified visual distortion" relative to LSD.

It has been marketed alongside psychedelic lysergamides like 1P-LSD and AL-LAD as a legal, grey-market alternative to LSD, and commercially distributed through online research chemical vendors. ETH-LAD has been shown to be moderately to significantly more potent than LSD itself in animal studies with an active dose reported at between 40 and 100 micrograms. Anecdotal reports suggest that while it produces similar effects to LSD at low to common doses, it displays a notably divergent effects profile at higher doses, sometimes described as producing “algorithmic” and “warped” visual and auditory distortions, combined with a more “introspective” and “analytical”, if not more “neutral” head space.

ETH-LAD has also been reported to more readily produce adverse physical effects such as severe and persisting nausea, temperature dysregulation, and generalized bodily discomfort, particularly at higher doses. This has been speculated to owe itself to an unusually sensitive and unpredictable dose-response curve, as low to common dose experiences are generally described as being very manageable and non-threatening. Very little data exists about the pharmacological properties, metabolism, and toxicity of ETH-LAD, and it has little history of human usage.

Along with its sensitive dose-response and potentially concerning physical side effects, many reports suggest that this substance may be overly difficult to use safely for those who are not experienced with hallucinogens. It is highly advised to use harm reduction practices if using this substance.

ETH-LAD is a structural analog of lysergic acid with an N,N-diethylamide functional group bound to RN of the chemical structure.

This core polycyclic structure is an indole derivative and has both overlapping tryptamine and phenethylamine skeletons embedded within its molecular structure (although it is principally classified as a tryptamine).

ETH-LAD’s structure contains a bicyclic hexahydroindole fused to a bicyclic quinoline group (nor-lysergic acid). ETH-LAD does not contain a methyl group substituted at R6 of its nor-lysergic acid skeleton as is the case with LSD; this is represented by the nor- prefix.

Instead, ETH-LAD is substituted at R6 with an ethyl group.

At carbon 8 of the quinoline, a N,N-diethyl carboxamide is bound in the same configuration of LSD. ETH-LAD is a chiral compound with two stereocenters at R5 and R8.

ETH-LAD is currently a gray area compound within many parts of the world. This means that it is not known to be specifically illegal within most countries. People may still be charged for its possession under certain circumstances such as under analogue laws (as an analogue of LSD) and with the intent to sell or consume.