A rare, highly potent and yellow psychedelic phenethylamine and derivative of 2C-N. Effects are similar to other NBOMe compounds, with hallucinations, intense body load, stimulation and vasoconstriction. At high doses vasoconstriction can be dangerous, exercise caution. 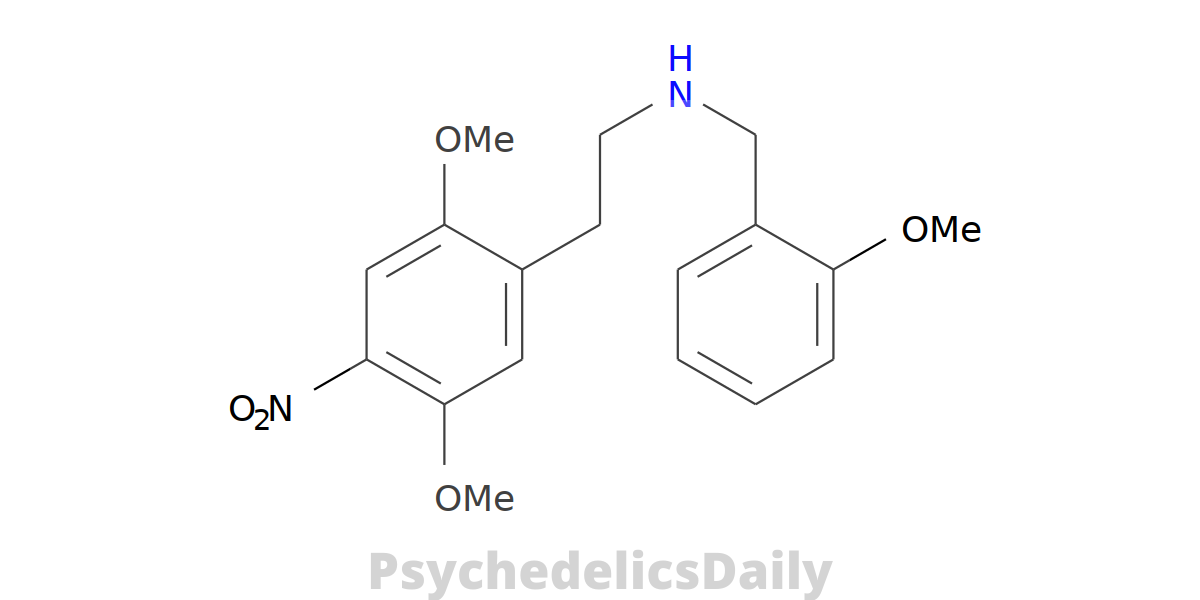 A rare, highly potent and yellow psychedelic phenethylamine and derivative of 2C-N. Effects are similar to other NBOMe compounds, with hallucinations, intense body load, stimulation and vasoconstriction. At high doses vasoconstriction can be dangerous, exercise caution.

The name 25N-NBOMe, which short-hand for 2C-N-NBOMe, is a derivative of the phenethylamine psychedelic 2C-N. It was discovered in 2004 by Ralf Heim at the Free University of Berlin and subsequently investigated by a team at Purdue University led by David E. Nichols.

25N-NBOMe has a notably shorter duration than the rest of the 25x-NBOMe series with a total duration of 6 hours and a peak duration of 2 hours. It is moderately active at a dose of one milligram, and two milligrams provide a strong/heavy trip. This substance is considerably less potent when compared to the more popular NBOMe compunds such as 25B-NBOMe, 25I-NBOMe and 25C-NBOMe, all which produce strong experiences at doses above 1mg.

Compounds of the NBOMe family are not orally active and should be administered sublingually by placing and holding it into one’s mouth and allowing it to absorb over a period of 15-25 minutes. This substance had no history of human use before being sold online as a designer drug in 2010. Extremely little is known about the pharmacological properties, metabolism, and toxicity of 25N-NBOMe in humans, and many members of the 25x-NBOMe series have been associated with deaths and hospitalizations.

Along with its highly sensitive dose-response and unpredictable effects, many reports also suggest that this substance may be overly difficult to use safely. Therefore it is highly advised to approach this poorly understood psychedelic substance with the proper amount of precaution and harm reduction practices if using it.

It differs from 2C-N structurally through a substitution on the amine (NH2) with a 2-methoxybenzyl (BOMe) group as shown in the image to the right.

25N-NBOMe shares this 2-methoxybenzyl substitution with other chemicals of the NBOMe family.